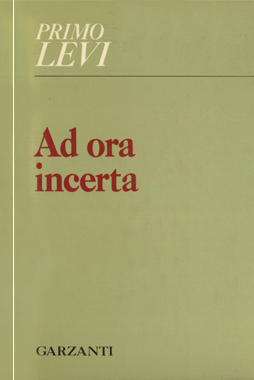 Ad ora incerta gathers together 63 poems and 10 translations that span 40 years, from 1943 (“Crescenzago”) to 1984, when he had his poems published regularly in the cultural section of the Turin newspaper La Stampa.

There are poems written heatedly right after his return from Auschwitz, when he still felt seared by his experience, and then poems from later on inspired by a didascalic-moral vein that is rare in twentieth-century Italian literature. The following is Levi’s preface to his anthology.

"In all civilizations, even in those without writing, many people – illustrious or obscure – feel the need to express themselves in verse and they subject themselves to it. Hence they secrete poetic material, addressed to themselves, to their neighbors, or to the universe, material that can be full-bodied or bloodless, eternal or ephemeral. Poetry was certainly born before prose. Whoever has never written verses?
A man, I am. Me too – at irregular hours, 'at uncertain hours,' I gave in to this shove. As far as I understand, it is written into our genetic heritage. At certain times, poetry seemed to be more ideal than prose for getting across an idea or image. I don’t know why and I have never worried about this. I know very little about poetic theory. I read very little of other people’s poetry. I don’t believe in the sacredness of art and I don’t even think that these verses of mine are excellent. I can only assure any eventual reader that in certain rare instances (on the average not more than once a year) individual stimuli have taken on – naturaliter – a certain shape that my rational half keeps on considering unnatural. Primo Levi".

Levi’s poetry reasons, describes (animals, above all), plays with words, and throws itself towards far-away geographies and towards the fathomless tales of myth. His exercises in translation include an anonymous seventeenth-century Scottish poet, Rudyard Kipling and, above all (8 of the 10 texts), Heinrich Heine. These are translations that are, according to Levi, “more musical than philological and rather pieces for amusement than professional works.” The following is a selection from the jacket flap of the first edition.

"[...] Right from the start, it seems to me that Levi’s poetic writings have the same solemn moral acumen, the same power of memory, warning, and piety that makes his prose so substantial, so to the point, and so naturally memorable [...]. In Levi the start-off, the initial impulse of every single poem comes out of reason, out of the moral reading of reality, out of that potential to grasp one’s own sufferings and to experience one’s own indignation as the common heritage of all human beings – exactly what makes his prose unique and, I dare say, irreplaceable."

Ad ora incerta won the Abetone Prize of Pistoia Province as well as the National Giosué Carducci Prize of the city of Pietrasanta. Ironically, the next-to-last poem in Levi’s anthology, “Pio”, is a parody that turns Carducci’s famous poem, “Il bove” upside down [“The Ox,” not translated in Collected Poems].