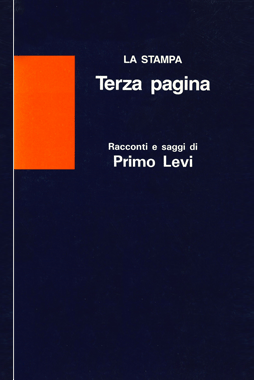 Racconti e saggi brings together 15 short stories and 20 essays. It is the last book Primo Levi published in his life. It came out in the fall of 1986, a few months after I sommersi e i salvati, which came out in the spring of that same year.

The book is one in a series of books called "Terza Pagina" ["Page Three", the page reserved for culture and books in Italian newspapers], dedicated to anthologizing the articles of the most authoritative contributors to the Turin newspaper, La Stampa. Levi wrote “A Monument for Auschwitz,” his first article for La Stampa, on July 18 1959. He became a more regular contributor beginning with his article La luna e l’uomo [“The Moon and Man”] on December 27, 1968.

"I hope the reader will be indulgent toward the extreme dispersion of my themes, tones, and angles of approach that he will find in this collection. My justification is: the 'pieces' are situated in an arc of time that is close to a quarter of a century, the time of my almost total fidelity to La Stampa: and in twenty-five years many things change, inside of us and around us. Furthermore, they are conditioned by my intrinsic libertinage, in part willed, in part due to the itinerary fate has reserved for me; I’ve drunk at various founts and breathed different airs, some salutary, others quite polluted. I’m neither sorry for this nor do I complain: 'the world is beautiful because it is varied,' quotes the protagonist of one my books, with his typical lack of originality. I beg the reader not to go in search of messages. It is a term that I detest because it distresses me greatly, for it forces on me clothes that are not mine, which in fact belong to a human type that I distrust: the prophet, the soothsayer, and the seer. I am none of these; I’m a normal man with a good memory who fell into a maelstrom and got out of it more by luck than by virtue, and who from that time on has preserved a certain curiosity about maelstroms large and small, metaphorical and actual.
Primo Levi
October 1986"