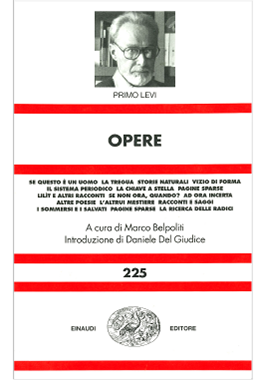 1997, the year that marked ten years after the death of Primo Levi, was the peak of the period of interest growing around the figure of this writer. The most noteworthy product of that year is this edition of his works, the two volumes edited by Marco Belpoliti. They are impeccably and richly annotated and amount to over 3,200 pages in all.

The critical apparatus includes an introductory essay by Daniele Del Giudice, a chronology by Ernesto Ferrero and a bibliography of Levi’s writings and interviews compiled by Belpoliti. The books are arranged in chronological order, with the exception only of I sommersi e i salvati, a kind of testament-work that is rightly placed last. Each of the two volumes contains an appendix gathering a total of 480 edited pages of miscellaneous writing from the corresponding periods, 1946-1980 and 1981-1987. The second volume contains La ricerca delle radici, a personal anthology, in smaller print. The very valuable text notes reconstruct the history of each text, clarify its context, the people it is addressed to and who were connected with it, and its links to other books. This book tells the passionate story of the publishing of Se questo è un uomo. Belpoliti even examines the variants between the De Silva edition of 1947 and the Einaudi edition of 1958. Del Giudice’s introduction fulfills its task perfectly for the benefit of readers who want to grasp the essence of Levi. The concise precision of the introduction is evident from its very beginning: “There are two distinctive characteristics – perhaps the two characteristics – that our century, now fading away, will pass on in memory to the following centuries – the extermination camps and the manipulation-exploitation of matter. It was Levi’s biographical destiny that he not only experienced both characteristics but was fully aware of what was going on.” This is the general premise that straight away goes right to the heart of the question, something that makes these two volumes indispensable for anyone who wants to approach the works of Primo Levi in a thoughtful way.