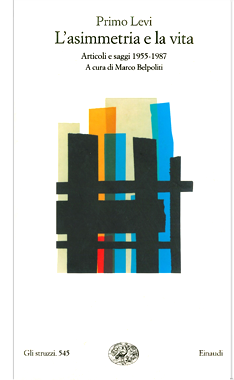 "Levi published a series of articles on various topics and for various occasions in newspapers and periodicals from 1955 to 1987, the year of his death. These were collected together and published in their entirety in the first collected-works edition (Opere. Turin: Einaudi, 1997). This volume offers us again a wide range of choices, which bring out the many 'trades' of Levi – witness, writer, and chemist. The first part brings together writings on his experiences in the Lager, including prefaces (such as the celebrated 'Preface to R. Höss’s Commandant of Auschwitz'), the indignant condemnation of deniers ('Seekers of Lies to Deny the Holocaust'), and the emblematic 'Deportees. Anniversary' from 1955, where Levi regrets the fall in the level of interest in the topic of the extermination camps and urges us to be on guard against the loss of collective memory. In the vast range of their topics, in the coherence of their reflections, and in the clarity of their style, these pages give us another glimpse of the Primo Levi who is both passionate and anti-rhetorical whom we long have learned to recognize as a classic of our writing".