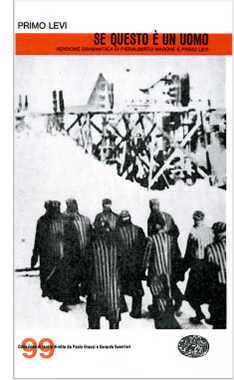 Before this theatrical version of Se questo è un uomo, Levi had already written a radio version that was broadcast April 24, 1964. The script for the theater was written two years later in collaboration with the actor Pieralberto Marchè (the stage name of Pieralberto Marchesini) and was put on stage by the Teatro Stabile di Torino, the official theater company of the Piedmontese city, under the direction of Gianfranco De Bosio.

The national premiere had been scheduled for the city of Prato, but was transferred to the Teatro Carignano in Turin because of the floods in Florence (November 4 1966). The first performance, which took place on November 18 1966, made a great impression because of the choral power of the actors. There were thick crowds of actors, dozens of them, who came from theater companies all over Europe and who gave life to a multilingual mix that was as evocative as it was traumatic. The SS never appeared, but their raging and incomprehensive voices were hurled at the audience from loudspeakers set up around the theater. There was no role for Primo Levi as a character. Instead, his role was played by a character named Aldo. A chemist like Levi, Aldo narrated what was happening in the theater-goers’ sight. The script was printed by Einaudi publishers in time for the performance with an introduction written by Levi.