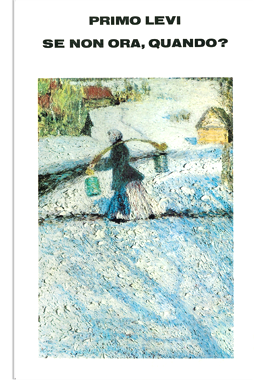 The plot of Se non ora, quando? is inspired by a true story. A band of Russian and Polish Jews had been fighting a partisan war against the Nazi invaders, ranging far and wide over Europe. The book came out in 1982, listed in the main narrative book series of Einaudi publishers (the "Supercoralli"). It is the first novel, properly speaking, written by Levi, a long epic whose narrative spans the time from July 1943 to August 1945 and helps dismiss the cliché of the submissive Jew who would let himself be conducted to extermination without fighting back. On top of that, by telling this story Levi, in a way, makes up for the fact that he had been a partisan who was so inexpert that he was quickly captured by a Fascist militia in 1943.

The title of the novel is taken from the Pirké Avoth (The Maxims of the Fathers, from the second century A.D., the collection, a part of the Talmud): “If I am not for myself, who will be for me? And even if I think of myself, what am I? And if not now, when?” However, the core of this book should not be sought in this two-fold making up for the past nor in the summons for us to come out of every ghetto. What is at the center of this novel is the taste for adventure. Levi follows his partisans in battle and in their endless wanderings all over the map. (At a closer look, the map at the beginning of the book resembles the one in La Tregua). He makes their clamorous energy live again and he rejoices in it. He constructs and weaves together loves and betrayals, exaltations and disappointments, insidious lines of reasoning and simplistic losses of patience. He records instances of tenderness and brutality, the poetry of combat and the prose of necessary compromise, all balanced in a steady tone of voice.

Se non ora, quando? is Levi’s longest book and the only one that he openly labeled a “novel.” This was a risk for a person who, in his writing, had always ranged among the fields of witnessing, autobiography and essay, except for his digressions into science fiction. It is perhaps for this reason that Levi shelters his pages with a library of readings, where he documented himself on the war and partisan struggle, Jewish traditions, and the Yiddish-speaking world, a world rather distant from the sensibilities of an Italian Jew. At times, this wish to write a well-rounded novel weighs upon the narration. The most happy aspect of the book, however, is the array of women in it who arouse passions that may be violent, modest, improvised or contorted. It is in Se non ora, quando? that Levi most openly takes the body and sexuality into account and he does this by sometimes entrusting his narrative perspective to the three male characters that he identifies with. There is Mendel, the watch-mender, who is Levi’s most probable alter ego, Mendel the “consoler” – lucid, empathetic, mild, and decisive. There is Leonid - dark, gloomy, and hotheaded, a man whose spirit cannot be reached and who is moved by a tormented instinct towards perdition, whose death in guerrilla combat is the equivalent of a suicide. Lastly, there is Gedale, the commandant, the idealized image of a joy in living exercised in response to impulse and reason, a hero who lives from intelligence, readiness, flexibility and free will, the capricious man of action that Levi had certainly dreamed of being. It is not an accident that the first part of the book is the chronicle of the coming together of Mendel and Leonid on the one hand, and Gedale, on the other, in the village of Turov. Then, Leonid is to disappear, while Gedale and Mendel go off together.