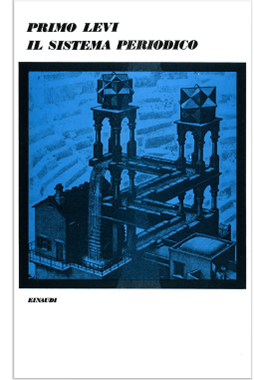 Il sistema periodico is the most complete and many-faceted of Levi’s books. It is his most primo-levian book, as Italian novelist and critic Italo Calvino put it. In these pages there is a historical witnessing that is served up to the readers in a literary style of stunning happiness, where moral power, humor and playful language blend together. Like a great teacher, Levi offers us his experiences as lessons with a persuasive energy that is enlivened by levity and irony. For this reason, Il sistema periodico is the book in which we can appreciate Levi’s whole physical and moral person. We find him whole and also broken up into his prime elements, just as the title promises.

Each of the twenty one texts of Il sistema periodico bears as title the name of a chemical element – “Hydrogen,” Zinc,” “Potassium,” “Nickel” and so on – going on until these make up an abridged version of the periodic table plotted out by the Russian chemist Dmetri Mendeleev in 1869. In fact, this is where the title of Levi’s book comes from. From time to time, the element that the chapter is named after is also the material that is the protagonist - or, more precisely - the catalyst of its moral and narrative energy. It is only in the story that the book opens with, “Argon,” that the presence of the element is not concrete but symbolic. Levi begins here by telling the story of his ancestors, a weird, many-branched tribe of Piedmontese Jews. Argon, the perfect and rare gas whose name means the inactive in ancient Greek, is the characteristic emblem for these indolent and witty people that are good at lazy and quibbling discussions and equipped with paradoxical virtues and eccentric habits. Once Levi puts down the family lexicon of this rare species to be condemned to extermination at the hands of the Nazis some decades later, he intertwines three larger stories, skipping from element to element. First, there is his personal story from his early adolescence up to his adulthood. Second, there is the story of a generation trodden down by Fascism, by the racial laws passed in 1938, by the world war, by a brief and inexpert partisan struggle and finally by the deportation into the Lagers. The third large story is that of the chemists who were “knocked to the ground,” foot soldiers in hand to hand combat with materials in order to understand their secrets and make them bend to their wills, proceeding by trial and error. Levi tells the stories of chemist-craftspeople who get by through adapting their five senses as well as their common sense. In this way Levi has designed his personal and collective autobiography.

If we imitate Levi’s example and so try to analyze this book, we will find very many characteristics and experiences of Levi’s. We even find his pre-history as a teenage writer “before Auschwitz” in the stories entitled “Lead” and “Mercury.” In “Iron” we find the most decorous and moving moral portrait that he ever drew, the portrait of his Alpinist friend and partisan, Sandro Delmastro. We find his professional and sentimental education as it is maturing in those politically dark years. We find a combination of the waiting for death and the energy to survive in his story, “Gold,” where Levi uses surprisingly comic details to describe his capture by the Fascists after a few weeks of his experience as a partisan. After his liberation from the Lager we again find the freedom of the post-war period, the joy of working and telling stories. (There is only one story, “Cerium,” that is set in Auschwitz.) We see the shadows of Auschwitz again that come back both to disturb us and make us curious in a story like “Vanadium.” In the end, we find a homage to his double bond to chemistry and writing, to his own calling as a person who remembers, witnesses, works, and narrates in the story of the atom, “Carbon,” that concludes the book.
The Periodic Table won the Prato Prize in 1975.

"With this new book of his, Primo Levi shows us how his calling as writer-witness was not exhausted in the memorable pages of Se questo è un uomo and La Tregua. At first glance, this book seems to be an autobiography of a chemist divided into twenty-one 'moments,' each of which takes a cue from an element - nitrogen, carbon, lead, nickel and so on. Thus these moments are encounters with matter, seen sometimes as mother and sometimes as enemy. In the face of matter, the primitive state of human beings as hunters lives again as they struggle with the world around them both to get to know it and simply to survive. These stories are stories of a craft, 'which is then a particular case, a more strenuous version of the craft of living.' The book has a wealth of defeats, victories, miseries, adventures and encounters, able to appeal equally to our reason and to our imagination. However, the book also tells the story of a generation, here represented by its best members. (We can see this in the splendid portrait of Sandro Delmastro.) The book reconstructs the events of growing up in society during the years of Fascism, the dramatic events of the war, the partisan struggle, the deportation and fitting back into the fatiguing recovery of the post-war period. This is the exemplary story of someone who starts out from the concrete situation of the profession of chemistry and educates himself to understand things and people, to take positions, to test himself with an irony and self-irony that do not rule out firmness. Or, perhaps the book can be read as a moral fable. Thus the ceaseless challenge of inert or ill-willed material can be seen as a Conradian metaphor of existence and of the opacity at its basis, where strange happenings, failures, and successes may emerge. As in all of Primo Levi’s books, here too the calm of his moral judgment comes together with a writing style of classical precision. Here we can find, in a setting that is less inhumane, Levi’s need to testify on behalf of reason and dignity."

"The author of this book – a series of essays each named after a chemical element – is an organic chemist. The book, however, is not about chemistry but about the personal and emotional development of the author. Levi is a Jew and a famous Italian writer, best known for two books entitled Survival in Auschwitz and The Re-awakening in English translation. Both are expressions of human survival by dignity and of Jewish humor without pathos-a combination rare among American Jewish writers.
The present book is again a terse, low- key, but intensely serious document of life under stress-either the stress of a youth curbed by Fascism or the stress of a chemist struggling with stubbornly defective reagents. The names of chemical elements are used sometimes as metaphors, sometimes more literally to provide occasions for sharp vignettes of the author's early life. As a Jewish student in a fascist society that made Jews openly pariahs; as a climber who found relief in fighting mountain slopes instead of the unapproachable fascist rulers; as a partisan facing the Nazi enemy in those same mountains; and finally as a young chemist learning to deal with the incompetence or worse of the industrial world- Levi sustains an evenness of mood through which shines the consciousness of a hard personal integrity.
Among the essays the first, 'Argon,' depicts the little-known society of Piedmontese Jews, in which both Levi and this reviewer were raised, a culture that for a long time hardly interacted with the surrounding Christian world (hence be-having like the noble gas argon in air) yet made some outstanding contributions to Italian intellectual life. Anthropologists may be interested in this essay, which reveals a hitherto neglected facet of Italian society.
The essay called 'Gold' is both personal and symbolic. In prison as a partisan, his life in immediate danger, Levi found relief in consorting with a professional smuggler who had at some time eked a living by collecting a few flakes of gold from a mountain river. The implied message: there is some gold to be found in a human being, or in a river, or in prison if you are alert to it.
Other essays are closer to natural science. 'Potassium' – set in 1941 – tells of a brief courtship the author had with physics as a possible vocation. The immediate impetus was apparently the willingness of a young physics teacher of philosophical bent to take seriously the intellectual eagerness of a student whom chemistry teachers had, not surprisingly, left unstimulated. This reviewer, who a few years earlier had found among Italian physicists the intellectual stimulus liberating him from a humdrum medical education, can vouch almost to the last comma for the authenticity of the experience described by Levi.
'Arsenic' is a vignette that could easily have been turned into a crime investigation in the hands of a less sensitive author. One of his first clients brings to Levi a pound of sugar which he suspects of having been doctored. Levi analyzes it and finds plenty of arsenic. For the rest of the day he goes on with other work. Next day the client returns, hears the verdict, explains calmly that a competitor – a cobbler like himself – has been making his life hard and now has apparently attempted to poison him. No fuss, no police; the cobbler, a quiet Piedmontese, will return the sugar to his enemy and 'explain two or three things' to him. Levi's philosophy of constructive faith in reasoning reminds me, here and elsewhere in the book, of Diderot's trust in human common sense.
'Vanadium' is the story of a more recent event. While dealing with a German firm concerning a batch of imported resin (which misbehaved because of a vanadium salt impurity) Levi discovered that his German correspondent was the same man who had been his boss in the Auschwitz camp. The exchanges that ensue illustrate the conflicts of an honest man divided between the forgiveness demanded by personal self-respect and the contempt felt for a Nazi colleague-truly an impurity in the scientific milieu.
In all 18 essays the writing has an immediacy achieved without sacrifice of sophisticated literary skill. The English translation manages to keep the freshness of the original Italian best seller. Primo Levi succeeds in transforming chemical concepts and processes into metaphorical comments on life. He also achieves the more difficult feat of writing autobiographical stories without either self-effacement or self-congratulation. These essays are in fact, as the author calls them in the essay called 'Nickel,' 'tales of militant chemistry'."