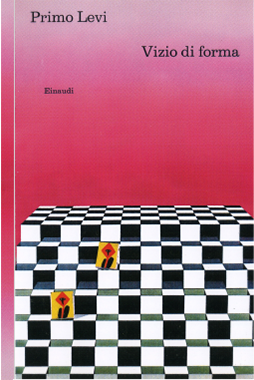 Vizio di forma is the second collection of fantastic-technological and fantastic-biological stories by Primo Levi. As opposed to Storie Naturali, which was published five years before under a pseudonym, this collection has Levi’s name on the jacket. The stories were written between 1968 and 1970.

Here we give the text on the inner jacket of the first Einaudi edition of 1971 in the series "I coralli". It is anonymous, but can in all probability be attributed to Levi.

"Will there be future historians, let’s say, in the next century? It is not at all certain. By then, humanity might have lost all interest in the past, busy as it surely will be at unraveling the woolen ball of its future. Or it will have lost its taste for the works of the spirit in general, being wholly focused only on surviving. However, if we do find historians, they would probably dedicate very little time to the Punic Wars, to the crusades, or to Waterloo, and, instead, would bring this twentieth century to the center of their attention, and, more precisely, this decade that has just began. It will be a unique decade. As these few years have rolled by, almost from one day to the other, we have noticed that something definitive has happened or is about to happen - like the person who, sailing on a calm river suddenly notices that the banks are racing backwards, that the waters are full of maelstroms, and already starts to hear the roar of the waterfalls. There is not any index of measurement that has not taken off – the world population, the Ddt in the fat of the penguins, the carbon dioxide in the atmosphere, and the lead in our veins. While half of the world is still waiting for the benefits of technology, the other half has touched lunar soil and is being poisoned by the waste that has accumulated over a few decades. Nevertheless, there is no choice. We cannot go back to Arcadia. Again, from technology, and only from technology can the restoration of planetary order take place – the mending of the 'vizio di forma' ['structural defect.'] In the face of the urgency of these problems, political questions pale. This is the climate, literally and spiritually, that serves as the setting for the twenty stories of Primo Levi that we are presenting. Beyond the veil of irony, the climate is near that of his earlier books. Here we breathe in an aura of sadness that is not desperate, of diffidence for the present and at the same time substantial confidence in the future. The human being, the craftsman of himself, the inventor and sole owner of reason, will find out how to stop himself in time in his walk 'westward'."

Next, there is a text signed by Primo Levi, the conclusion of his 1987 letter to his editor on the occasion of a reprinting of the book, which was re-published a few weeks before his death.

"Your proposal to reprint Vizio di forma after more than fifteen years both makes me happy and makes me sad…. It makes me happy because in this way, the most neglected of my books is living again - the only one that has never been translated, that has never won prizes, and that the critics accepted with their necks crooked away. If I reread it today, I find a good number of instances of naiveté and mistaken perspectives, yet I find some things that are not so bad. Synthetic babies are a reality even though they do have belly buttons. We have gone to the moon and the earth seen from afar is bound to look like what I described. It is too bad that the Seleniti do not exist and that they have never existed. The foreign aid we give to Third-World countries often faces the same fate that I outlined in the two stories of 'Recuenco.' With the spread of the service industries, there are more and more 'small red lights' and there was even a news item that appeared in the newspapers in 1981 that there was a monthly sensor identical to the one that I described. We are still a long way from a situation in which the story 'For a Good Purpose' [about phone networks] would come true. 'Così si osserva in me lo contrappasso' ['In me you see the perfect contrapasso.' (Dante, Inferno 28, v. 142)]. After hesitating a bit, the phone company Sip assigned a telephone number to my second house that was the exact anagram of my first house in Turin. In relation to 'Excellent is the Water,' Scientific American reported the news from a Soviet source of a viscous and toxic 'poly-water,' in many ways similar to the type I have written about beforehand. To the good fortune of everyone, the experiences related to this seemingly cannot be reproduced and everything went up in smoke. I flatter myself that the thought of my lugubrious invention had had a retroactive apotropaic effect on this 'poly-water.' Let the reader be reassured: water, even though polluted, will never become viscous and the all seas will still keep on having their waves.
Primo Levi
January 1987"