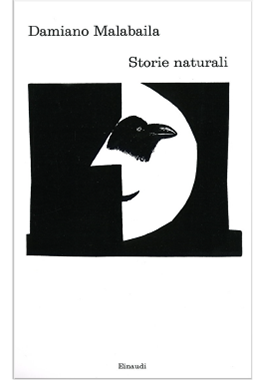 Storie naturali were published by Einaudi in 1966 under the pseudonym Damiano Malabaila. The last name means bad wet-nurse (mala + baila) in Piedmontese dialect. In truth, as the author reflected, “it seemed to me that many of my stories reek of a vague smell of milk that has turned bad, of nourishment that is no longer such - that is, they smell of tampering with, of contamination and of hexing.” The back-jacket text that we present is anonymous, but there are stylistic clues that lead readers to attribute it to Italo Calvino, who, as an Einaudi editor, had followed the book through its stages of publishing.

This book is the first collection of Primo Levi’s stories only in relation to its outward form. In fact, Se questo è un uomo and La Tregua are collections of brief texts. This was a period when Levi felt that he had nothing more to say about Auschwitz, as he declared in several of his interviews. By this time, however, Levi’s calling to a kind of modular form had become more versatile.

Written over a twenty-year period (1946-1966), the fifteen stories of Storie naturali - some more, some less - tell us about fifteen sorts of pregnancies that the faculty of reason went through while it was dozing and about the monstrous births that came out of them. However, it is the author of this book himself who sees himself as a paradoxical creature. This is the reason that he modestly chooses a pen name and that he willingly identifies himself with the centaur Trachi, the main figure of his story "Quaestio de Centauris" [“The Question of the Centaurs” (from Latin)], which is the most successful story of the collection. From then on, the centaur was to become the public emblem of Levi-Malabaila. His image was to remain centaur-like – “the writer-non-writer,” the narrator and chemist, the ex-deportee and man of the street, Jew and Italian, witness to Auschwitz and writer of the imagination.

"The fifteen 'entertainments' that make up this book invite us to move into a future that is more and more driven by the frenetic springs of technological progress and hence a future that is theater to disquieting or utopian experiments where extraordinary and unforeseeable machines are at work. And yet, it is not enough to classify these pages under the label 'science fiction.' Here we can find satire and poetry, nostalgia for the past and anticipation for the future, the epic and everyday reality, a scientific approach and an attraction for the absurd, a love for the natural order and a gusto in subverting it with combinatory games, as well as humanism and well-mannered ill-will. The author is a chemist and his profession shows through in his interest in how things are made inside, in how we recognize and how we analyze. But he is a chemist who knows the human passions not less than he knows the laws of the motion of masses. He disassembles and assembles the secret mechanisms that govern human foibles, nodding to the ironic allegories and to the smiling moralities that he offers us. All in all, we think that the best way to present these stories is to bring you an excerpt from a recent letter by the author:
'It somewhat embarrasses me to talk about my stories. However, the very description and analysis of this embarrassment could help answer your questions. I have written about 20 stories and I don’t know if I will write any others. For the most part, I jotted them down quickly, trying to give narrative shape to a little dot of intuition, trying to tell the story in other terms (if they are symbolic, they are symbolic unconsciously) of an intuition that is not very rare nowadays – the perception of an unweaving of the world in which we are living, of a little or a big crack, of a ‘structural defect’ that makes this or that feature of our civilization or of our moral universe vain. I don’t know if these stories are beautiful or ugly. There are some that a lot of people like, but I do not. There are several that many others reject but that I am the most proud of. In the act of writing these stories I feel a vague sense of guilt, like the guilt of somebody who is committing some petty misdemeanor on purpose. I entered the world of writing, unthinkably, with two books on concentration camps. It is not up to me to judge their worth, but they doubtlessly were serious books dedicated to a serious public. To offer this public a volume of joke-stories, of moral traps – that may very well be amusing but are distancing, cold – isn’t this consumer fraud, as if I were selling wine in olive-oil bottles? These are the questions I asked myself in the act of writing and publishing these natural histories. And so, I would not publish them if I had not noticed (not immediately, to tell the truth) that a continuity - a bridge - existed between the Lager and these inventions. The Lager, for me, was the biggest of the ‘defects’ – of the distortions – that I had been talking about before, the most threatening of the monsters generated by the sleep of reason'.”

In Storie naturali we can find the strong link that joins his “concentration-camp” production to his freely inventive production. It is no accident that many of the “histories” or “stories” are set in a vague Germany, suggested by the names of places and people and by not much else. Levi does not really engage in science fiction. Rather, he describes scenarios that take place in what he terms the “future perfect.” This is a threatening future whose signs we can already notice now. Levi develops these signs in the light of logic and takes them to their extreme consequences. Storie naturali are the extreme stories of a mild-mannered man. There are the folly of eugenics and the conversion of pain into pleasure. There is virtual reality that sucks in and chops up the mental and physiological life of anyone who lets himself be tempted. However, there are also the stories in which, after La Tregua, Levi confirms his vocation as a great humorist and juggler of language. The radio drama “The Versifier” and “The Sixth Day” are two proofs of his virtuosity. “The Sixth Day” is the “true” story of the secret meetings of the more or less divine mix-ups related to the creation of mankind. Likewise, Mr. Simpson is a virtuoso too, that weird and disquieting Natca sales agent (in “Order on the Cheap”), who offers us the inventions of his company like apples picked from the tree of good and evil. The inventions include the versifier, the Mimer-duplicator, the beauty measurer (calòmeter), and the tapes of the Total Recorder. Connected to all these inventions are their virtual experiences of ever increasing and ever more real perdition.

In 1967 Storie naturali won a long-established and prestigious prize in Milan, the Bagutta Award.