I sommersi e i salvati 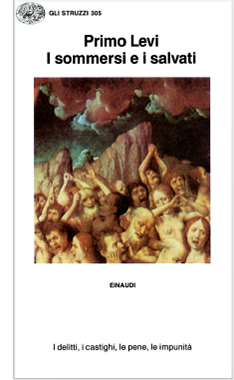 I sommersi e i salvati marks Primo Levi’s completion - at a distance of 40 years - of the reflections that gave life to his first book, If This Is a Man. This book, which had been in the making for 10 years, was published by Einaudi in the spring of 1986. It was immediately translated all over the world and recognized as an extremely important work on the nature of evil and on the nature of human beings.

Its pages touch upon many of the disquieting topics that had been taxing Levi’s mind in the last period of his life. The memory of Auschwitz seemed to be fading away and, along with it, seemingly, his own identity. The young students that he was meeting with in the schools were lacking in awareness and historical memory, often responding to his testimony with simplifying skepticism and treating it as something belonging to times long gone by. Revisionist historians were making themselves heard who denied or cast doubts upon the existence or specific nature of the extermination of the Jews and of the Lagers. Finally, Levi was impatient with the rhetoric that cast the figures the victims and the persecutors into rigidly defined opposing roles.

I sommersi e i salvati is divided into 8 chapters, a preface, and a conclusion. The first chapter, as its title shows, is dedicated to “The Memory of the Offence” as well as to the distortions and gaps in memory. However, the book pivots around Chapters 2 and 3, entitled “The Gray Zone” and “Shame.” Levi argues that the space between the categories of the victims and the perpetrators is not empty. Instead, “it is studded with obscene or pathetic figures (sometimes they possess both qualities simultaneously) whom it is indispensable to know if we want to know the human species.” This is an unpleasant topic, this topic of the various shapes that collaboration or acquiescence take between the victims and their oppressors – i.e. the Kapos [chiefs of labor squads], the Prominenten [privileged or protected prisoners], and all the other grotesque figures of privilege in the Lagers and the Jewish ghettos. Similarly unpleasant is the topic of the rarity of gestures of frightened pity made by German civilians. Levi investigates and suspends judgment, but he cuts deeply with his verbal scalpels into the living flesh of the deeds that were done. His investigations bring to light a paradoxical sentiment, that of the “shame of the survivor,” the person who is apt to believe that he has stayed alive in the place of someone else who was weaker, unluckier, or more honest than himself, someone from whom he has therefore taken something away.

"'It has happened, therefore it can happen again: this is the kernel of everything we want to say.' In eight densely packed chapters Primo Levi returns to his experience of the Nazi Lagers to read them not as an event that has been concluded, something unforeseen and defined in itself, or some kind of historical accident. Instead, he reads his experience as an example that helps us realize how far people can go in the roles of persecutors and victims.
Levi answers many important questions firmly and limpidly in a way that we are used to finding only in the works of classical authors. Doing this, he often clashes head-on with present-day mentalities, yet makes himself available to the younger generation, for whom the rise and fall of Nazism is becoming more and more distant and blurred.
What are the hierarchical structures of an authoritarian system? What are the techniques for wiping away the personality of the individual? What relationships are created between the oppressors and the oppressed? Who are the individuals who dwell in the 'gray zone' of collaboration? How do you make a monster? Could you understand the extermination-machine from the inside? Could you rebel against it? How does the memory of an extreme experience work? What did the Germans know and what did they want to know? Levi does not restrict himself to clarifying the features of the Lager that have stayed in the dark until now. His book is also a 'militant' book that fights against every falsification and denial of reality, against the pollution of the sense of ethics, and against our getting used to that human degradation that has been filling the pages of the hard news in these past decades. I sommersi e i salvati stands out as an important contribution to the foundation of a new and vigilant critical consciousness."

The Drowned and the Saved is run through with these thorny and gloomy topics as well as with Chapter 5’s topic, “Useless Violence.” This is a book that is as compact and controlled, in its style and tone, as a perfect sphere. Yet, it is patently disturbed by the psychological and cognitive state to which it owes its shape. This is a book of anthropology that includes the author himself into the field of his own investigations. It is the book of a person who would like to strike up a dialogue with the indifferent, the luke-warm, and his ex-persecutors, but he may have felt both fear and a cold chill of repulsion. (See the concluding chapter, “Letters from Germans.”) It is the book of someone who is making an effort to reason, to understand with the mind of his own persecutors. This is the monstrous role playing that may have given him some intolerable suffering. I sommersi e i salvati owes its greatness to this, to being an exercise in objectivity beyond what is human, a journey among the dead that turned into a voyage towards his own death.