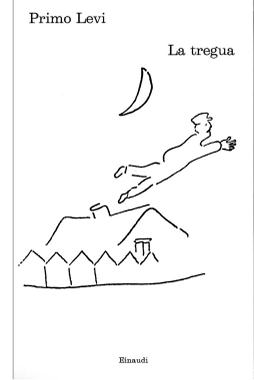 La tregua, Primo Levi’s second book, was published in 1963 by Einaudi, sixteen years after the first edition of Se questo è un uomo. There is a map at the end of La tregua, where we can see a line tracing Levi’s tortuous itinerary. The line starts out at Auschwitz and ends at Turin, after crossing seven countries – Poland, the Soviet Union (Byelorussia and the Ukraine), Rumania, Hungary, Czechoslovakia, Austria (twice), and Germany. This is the line tracing the route of the journey home that Levi was forced to take after the liberation of Auschwitz.

After the deadly Iliad of the Lager, this book traces the Odyssey of Levi’s return. It is a crowded tale, overflowing with characters and voices that overlap in all kinds of languages. La tregua is the story of wanderings that are unreasonable but full of energy that is being picked up from life that is beginning again. It is a full-bodied story, shot through with both anxiety and joy. Levi describes his last days in the Lager and here carves on his pages the most gripping emblem of sorrow – Hurbinek, the three-year-old child born in Auschwitz, a child who “had never seen a tree” and repeats a single incomprehensible word, an innocent victim and absolute witness whose language no one will ever understand. From here on, Levi’s journey begins, an endless route across a Europe that was still devastated by war. We see the most frenetic agitation take turns with the most unnerving periods of stillness and we meet unforgettable figures along the way. There are two characters who stand out from among them all - Mordo Nahum the Greek and Cesare the Roman. Mordo Nahum is a man of shape-shifting ingenuity, mainly for business. He is able to survive any and all dire straits because he has understood that “war is always.” Cesare is a great friend of Primo, gifted with an endless liveliness and shrewdness, but also with a tendency to get himself into absurd situations and to get himself out of them with astonishing machinations. Primo plays the straight man to him in the funniest episode of the book, the bargaining in gestures over the purchase of a chicken from some Russian peasants.

Primo Levi is the character who narrates, a human being who is thin, retiring, very attentive, ironic, and avid for food and stories. Levi is a great observer and portrait-artist of people, places, animals, and objects. His style is like a device that squeezes the most of expressiveness into a grip of conciseness. The attractive moral of La tregua consists in this distanced and yet concerned way of participating in the lives of one’s fellow human beings.

La tregua is a book that makes us feel the breathing of entire peoples and countries. First of all, there is Russia, which takes on a shape under the eyes of the readers with its cult of arbitrary and impure actions, with its blind biological force, with the excesses of its appetites, and with its unmanageable bureaucracy. In La tregua Russia turns out to be a kind of un-Germany. However, the book does conclude under the sign of the German imprisonment. After his months that have passed by crisscrossing Europe, Levi returns to his own bed in his house in Turin, but he has a recurring dream that he finds that he is still in Auschwitz. In this dream, Levi, this ex-deportee, feels that the Lager is the one and only reality and waits for the Polish word that used to wake them up every day at dawn - Wstawać.

"La tregua, a book of return, an odyssey through Europe in war and peace, is the sequel to Se questo è un uomo, the book that remains one of the most beautiful books in the European literature coming out of the extermination camps. The author, Primo Levi, keeps on considering himself 'an occasional writer' and is working as a chemist in Turin, where he was born in 1919. His first book was written right after his return, almost with the purpose of freeing himself inside. It was written as testimony that was required for being one of the few Jews who had survived the Lager, in obedience to his urgent and immediate 'need to tell our story to ‘the rest,’ to make ‘the rest’ participate in it.' Meanwhile, Levi’s second book was written at a distance from the events in an atmosphere that was more peaceful and relaxed. The miracle of Se questo è un uomo was its classical equilibrium in the face of the atrocious material of the story. Here, in La tregua, the most consuming note is a grip of anguish, of sorrow that cannot be remedied, this in the face of a fast-moving and colorful story of a spring of freedom that had ceased to be wished for.
In La tregua we learn how Levi’s Central European adventures did not end with the liberation of Auschwitz by the Russians. For reasons that have never been fully made clear, or maybe by virtue of pure negligence or bureaucratic disorganization, Levi’s repatriation and that of many Italians like him took place much later - at the end of 1945 after a tortuous and long journey through Poland, White Russia, the Ukraine, Rumania and Hungary, Czechoslovakia. This book is his travel log. It begins in the midst of the fog of Auschwitz, which had just been liberated and was still full of death. It stretches across never-before-described settings in a Europe under a truce. This is the Europe that had just come out of the nightmare of war and Nazi occupation but was not yet paralyzed by the new anguish of the cold war. Levi describes the black markets in Cracow and Katowice; bivouacking and mass movements of the demobilized soldiers of the Red Army; the limitless lands of Russia, run through with glory, misery, forgetfulness, and the life force; marshes and untouched forests; the noisy choral festivities of the Russians drunk with victory; and the dormitory rooms full of the dreams of the Italians on their uncertain way home.
In these pages we rediscover Primo Levi’s taste for the concise and witty, in the manner of the moralists. There is the Greek, loyal to his extraordinary anarchic mercantile code. There is Cesare 'a child of the sun, everybody’s friend,' who follows his crazy plans of action with a great practical sense. There is the Moor of Verona, the great old blasphemous man who seems like he has come out of the apocalypse. There is Hurbinek, the child born in Auschwitz who 'had never seen a tree.' The entire span of the book takes place under these two signs – on the one hand, the persistence, in dozens of open and secret ways, of the 'pestilence that had flattened Europe to the ground'; on the other, the discovery of a new Russia, seen at first hand and from the inside, sometimes smiling, sometimes tragic, and picaresque or epic or Oblomovian [idle and passive], far away from any ideological framework and much closer to the famous representations of Pushkin, Gogol, and Tolstoy".

La tregua won the first Campiello prize that was awarded. In 1997 director Francesco Rosi adopted a film from La tregua, with American actor John Turturro in the role of Levi.