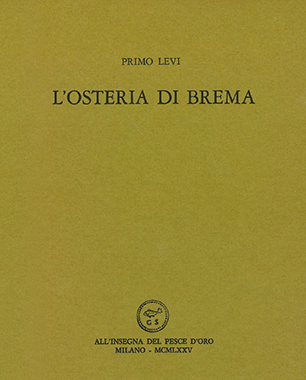 Levi published his poems privately at first. They made up a little anonymous volume without a title. The cover was cardboard and the 23 texts were typewritten. This was 1970 and 300 copies were printed.

Five years later he entrusted his poems to a little but prestigious Milanese publisher, whose name was Vanni Scheiwiller. This volume had 27 texts and 1500 copies were printed. The date marked as the closing of the printing was April 25 1975, the 30th anniversary of the liberation of Italy from Nazi-Fascism. The oldest poem was “Crescenzago,” dated February 1943 and destined to be the first poem in Levi’s 1984 anthology, Ad ora incerta, [translated as Collected Poems], where we can find all the texts in L’osteria di Brema.