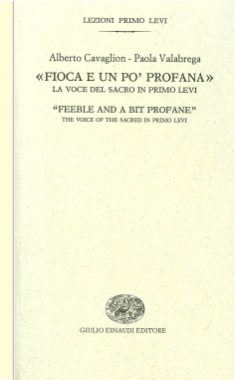 On one hand, the path taken by a chemist and enlightened writer like Primo Levi along the ways of the sacred might appear to be strange. And yet, this path is confirmed by many of his works, On the other hand, Levi loved to define himself as a "centaur", a hybrid creature, and his appearance actually seems double-faced. When approaching the biblical scripture or, in generaI, the traditions of the Jewish people, his voice could sound "fioca e un po' profana" (feeble and a bit profane), as he himself, indirectly, suggests, He is not a writer with a mystic and religious flair; however, in the "Canto of Ulysses" from lf This Is a Man, in the short story "Carbon" from The Periodic Table and elsewhere, Levi's style touches issues as deep as the concepts of impurity and guilt, as ancient as Jewish prayers, as solemn or parodistic as Dante's verses. The authors of this Lezione explore these references all the way to the roots of what is sacred: with many surprising discoveries.