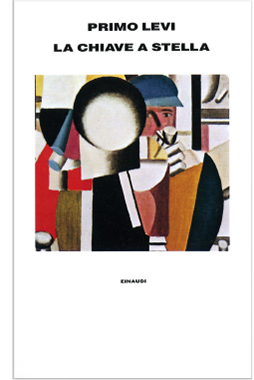 Tino Faussone, a Turinese, is a rigger by trade. “He’s about thirty-five, tall, think, almost bald, tanned, always clean-shaven. His face is serious, rather immobile, not very expressive. He’s not a great story-teller. On the contrary, he’s somewhat monotonous, playing things down, elliptical, as if he were afraid of seeming too exaggerate. But often he lets himself go, and then, unconsciously, he does exaggerate.” We are in Russia in an unnamed factory (in reality, the Fiat factory in Togliattigrad). Here Levi appears in this book as a character who writes and listens, finding himself on business trip. Every night he meets Faussone in the workers’ cafeteria and takes in his stories eagerly, declaring that he wants to make a book out of them.

This is the way that La chiave a stella originates, under our own eyes, as a book of listening, where the act of hearing and the style of writing filter experiences, as told, that pass through them. A voice passes through and takes on a final shape – the voice of experiences that have been lived through, of passion and of curiosity for the lives of others, for the past lives of others, for the trades of others, and for their customs, oddities, struggles and defeats. It is no accident that the title of this book alludes to the wrench, the tool that no rigger can do without and extension of the hand that he cannot separate himself from. This title, The Monkey’s Wrench, is La chiave a stella [literally "star-shaped key"] in Italian, alluding to the star of David that symbolizes Primo Levi’s Jewish identity, a key for reading and interpreting the world, a tool for the mind.

La chiave a stella was published by Einaudi in the fall of 1978 in the Supercoralli Nuova series. In the following year, it won the Bergamo and the Strega awards. The book had a blurb, written on the back jacket. It is unsigned, but was written by Italo Calvino.

"In these there are a great number of Italians who spend more or less long periods of time in far-away and exotic countries to do technical jobs for our companies. This is a type of new experience that is entering our narrative tradition.
La chiave a stella tells the adventures of a rigger of cranes, metal structures, suspension bridges, and oil rigs. He is a technician with great craftsmanship, so much so that he is called over all the continents to complete extremely hard projects. He is a super-specialized worker that spends his life going from one contract and international trip to the other, like a great orchestra director. He does his work among the rivers of India at full flood level, the glaciers of Alaska, the jungles of Africa, and the tundra of Russia. This is the type of character that only Primo Levi could represent through and through in his two main traits. The first is Faussone’s passionate professional competence, because of which every adventure is also the story of a technical 'performance,' a battle won or lost against physical materials and environmental conditions. The second trait is his picaresque life of a round-the-world traveler, of the amused and ironic expression on his face when he takes on each adventure as citizen of the world, with the taste, already, of the fun he would have talking about it to his home-town friends and turning it around into dialect and slang. Levi is the only one who could bring us this voice.
It is Faussone’s voice that we continuously hear on these pages, Faussone the rigger’s, in a Piedmontese flowered by an inexhaustible repertory of slang, jargon, and professional metaphors that Primo Levi records and transcribes, italianizing them just so much to make us understand. There is a two-fold passion that animates this book - one for exact labor and one for colorful language. In this way, the most daring technology and the freedom of moving around the world come to us through the easy-going and reductive voice of this personality. Faussone has home-town roots that grasp quite strongly. He never draws back before something new or unusual but filters every experience in the light of his folksy, traditional common sense. Behind him there is an old-time and ceremonious Turin that Levi gives us a glance at in the chapter on the visit to Faussone’s aunts. Besides, there is also a dynasty of craftspeople-workers who came down from the country into the city following the waves of our industrial revolution. And yet this talkative and ingenious Faussone is still a man pursuing an ideal with an obsessive rigor, a stylist of a clean-cut and metallic moral, a dweller of the air, up there in the pylons that he goes around making grow larger and checking out with his 'monkey’s wrench.' He is always ready to enjoy the world down here but only after he reassures himself that the cables can support the pressure of their loads.
Primo Levi had already given us Il sistema periodico, a book that is exemplary as well as rare in the tradition of our literature on the moral up-bringing of a man of our era. In this new book he offers us an image of that almost unknown culture of competence that really exists in Italy (happily 'not up-to-date' in relation to the humors of these times). He makes an age-old kind of nobility live again, that of the craftsperson who makes things with his or her own hands. And the allegro of Levi’s story-telling is the same as we have known ever since his peregrinations in La Tregua and these were picaresque too, even though they went through settings that were tragically devastated.
He even enters the book himself, the chemist Primo Levi, to dialogue with his fellow Turinese, Faussone, whom he had met in that far-off district, to compare Faussone’s experience as a rigger of cranes with his own experience in his two crafts – that of a 'rigger of molecules' and a 'rigger of tales'."