For the first time in exhibition, a significative selection of copper-wire works made by Primo Levi – objects that are profoundly intimate and domestic – generally made out of copper wire, scraps and test materials coming from his work as a chemist.

These are objects with a strong intimate and domestic character destined for the shelves in Levi’s study or for his dearest friends as presents. There is no precise dating for the objects, which were made more or less between 1955 and 1975. There are no titles that Levi gave them. The material used generally is copper wire. His work as a chemist specialized in the enameling of electrical conductors is something that enabled him to have a lot of scraps and testing material available.

Thus they are treated as such in the exhibition – not as works of art but as products of Levi’s imagination and manual dexterity, pieces in a game in the broadest and most positive sense of the word. This takes nothing away from the grace and quality of the artifacts. Levi’s thoughts and evocations take shape in these objects, where the scientific precision of the particular object is accompanied by or is alternated with a more impressionistic take. Animals are the first source of inspiration , but there are also fantastic creatures and the human figure. 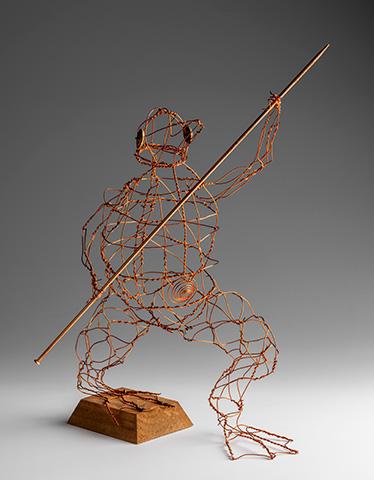 When we approach these works, we can open an extraordinary viewpoint into the world of Levi, a world with a wealth and multitude of skills and sensitivities that stretch much beyond the more established and widespread univocal image of Levi as witness of persecution and deportation. Instead, a rich and complex figure emerges from this, where his education as a chemist lives together with a solid classical literary culture. There is also  his passion for languages, etymologies, plays on words (he considered games as one of the primary activities of human beings.), alpinism, fantasy, irony, and humor, a curiosity towards the most recent artistic expressions, and a lively and competent interest in mathematics, physics and the natural sciences.

The background for all this is the paramount importance that Levi attributed to work, to manual work in particular, to the “hand as crafter,” because, as Levi himself reminds us:

learning to do something is very different from learning something.

The materiality of the objects he created is an exaltation of free work and a confrontation with matter, for to understand matter is to understand the world and furthermore matter is the “great antagonist of the spirit.”  Upholding the nobility of technology is also a way of rejecting – culturally even before politically – the foundations of Fascist education and Giovanni Gentile’s model of education that Levi was subjected to in school.

We chose to propose literary quotations with a certain degree of freedom rather than precise captions. There are words taken mostly from Levi’s works and, sometimes, from some of his favorite writers with the risk of a certain arbitrariness, naturally, but in view of Levi’s own words when he said:

I don’t know anything more boring that an orderly reading list and, instead, I believe in impossible combinations.

For a thorough examination of this, read Robert Gordon on Doppiozero.com